The main ideas in this post are described in slides here.

Collaborative text editing was the original motivation for Conflict-free Replicated Data Types (CRDTs) (WOOT 2005), and it is still a popular use case. It is also the most difficult CRDT application: the underlying List CRDTs have complicated algorithms and implementations, and there are a lot of them spread throughout academic papers and software libraries. This makes them intimidating to study.

In this post, I describe Plain Tree, a basic List CRDT that I find fairly easy to understand, plus some simple implementations. My goal is that you will also understand it, filling in a gap from my previous post. Despite its simplicity, the CRDT described here is my preferred List CRDT. In particular, Collabs uses it for all list implementations.

You don’t need to have read the previous post, Designing Data Structures for Collaborative Apps, but its introduction may be useful if you are new to CRDTs and collaborative editing.

What We Need: A “Uniquely Dense Total Order”

To start, let’s think about making a collaborative plain text editor, like this Collabs demo. The editor’s state is a text string, replicated on each user’s device, such that any user can insert (type) or delete characters from the string.

In usual CRDT style, we mandate that all users see their own changes immediately, but also reflect other users’ changes once they receive them, possibly after an unbounded network delay. The end result must be consistent across all users (CRDT correctness/strong eventual consistency) and should also be “reasonable”, e.g., edits to two different parts of the text each show up as expected.

We can generalize this problem to collaborating on arbitrary lists of immutable values. Collaborating text editing is a special case: a list of characters. A List CRDT is a CRDT for such lists, with insert and delete operations. Formally, the operations on a List CRDT are: 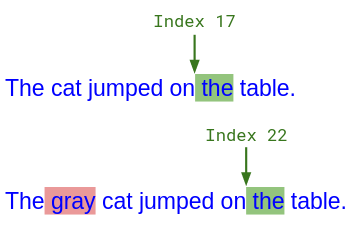 Alice typed " the" at index 17, but concurrently, Bob typed " gray" in front of her. From Bob's perspective, Alice's insert should happen at index 22.

To handle this, most List CRDTs abandon indices internally. Instead, they assign each list element a unique immutable position at the time of insertion, which abstractly describes how to sort elements relative to each other. The user-visible state of the List CRDT is just the elements sorted by their positions. insert and delete internally operate on positions, only using their index argument i to look up the current positions at/near that index.

If two users insert elements concurrently, then those elements are sorted based on their positions. Since all users see the same positions (and the same sort order on positions), they all sort these concurrent elements identically, ensuring CRDT correctness. Deleting one element doesn’t affect the positions of any other elements, so it is easy to ensure correctness for delete operations as well (see my previous post for details).

So, to make our List CRDT (hence our collaborative plain text editor), all we need is a way to sort and create these unique immutable positions. In other words, we need an implementation of the following TypeScript interface (also on GitHub):

Mathematically, this interface says that positions must be drawn from a total order, with two extra requirements:

A few notes about the UniquelyDenseTotalOrder interface:

You may be familiar with fractional indexing, which uses a dense total order, and wonder how UniquelyDenseTotalOrder differs. The answer is our added “globally unique” requirement: if two users call createBetween(a, b) concurrently for the same a and b, then we require both users to get different results. That way, it’s later possible to createBetween those two results.

Starting from text "ab", two users concurrently type 'c' and 'd' at the same place. After syncing, the order of 'c' and 'd' is arbitrary but must be consistent across all users; suppose 'c' is first, so the text is now "acdb". Later, a user might try to type 'e' in between 'c' and 'd'. This doesn't work with fractional indexing because 'c' and 'd' have the same position - there are no positions "between" them. But it does work in a UniquelyDenseTotalOrder-based List CRDT, due to our global uniqueness requirement.

The rest of this post introduces a basic UniquelyDenseTotalOrder that I especially like. I have not seen it in the existing literature, although it is similar enough to Logoot, Treedoc, and others that I wouldn’t be surprised if it’s already known. For now, I call it Plain Tree.

Strings make good positions because they are already ordered, immutable, and can be made arbitrarily long. You can even sort them in CRDT-unaware contexts, e.g., sorting a List CRDT’s elements in a database using ORDER BY positions.

To make a UniquelyDenseTotalOrder<string>, we really just need to implement createBetween: given strings a and b with a < b in the lexicographic order, return a unique new string in between.

Here’s a simple way to do this:

How do we get a globally unique new string? One strategy is to make it random and sufficiently long, e.g., a UUID. However, UUIDs are rather long, making it inefficient to send positions over the network. Instead, we use a causal dot: a pair (replicaID, counter), where replicaID is a reasonably short ID for the local replica (device)—say 10 random characters—and counter is a local counter incremented for each causal dot.

I wouldn’t recommend using these exact implementations due to their large position sizes, but they could be useful in a pinch.

The string implementation above works, but we’d like to understand it better.

I claim that mathematically, we can model our uniquely dense total order as a rooted binary-ish tree: 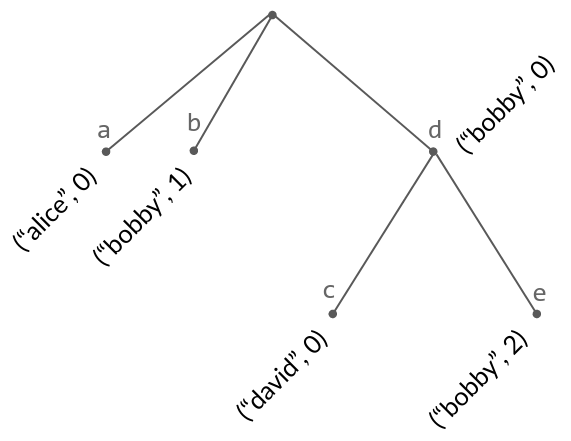 Example of a tree with corresponding text "abcde". Observe that the root has two left children, sorted by their causal dots; this can happen due to concurrent insertions. 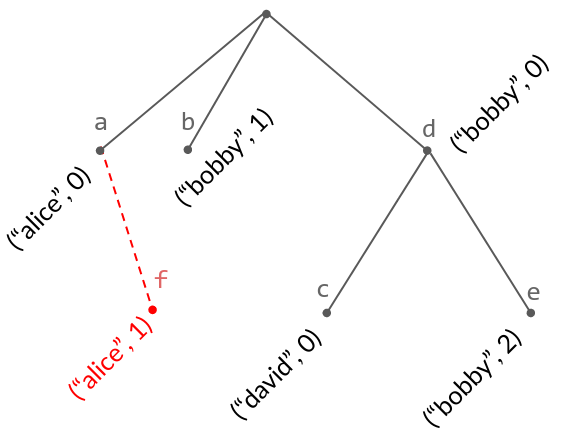 The same tree with a new node ("alice", 2), inserted as a right child of ("alice", 0). Its text is now "afbcde". Note that this insertion corresponds to the hard case above (though with different text).

In our string implementation, each string position describes a path in this tree, starting at the root: it alternates between listing the next node’s ID, and an 'L' or 'R' indicating whether the following node is a left or right child. 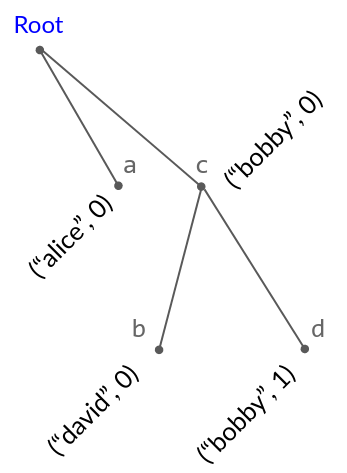 In this tree with corresponding text "abcd", our string implementation assigns the following positions: Observe that these are lexicographically ordered.

Finally, createBetween(a, b) works as follows: 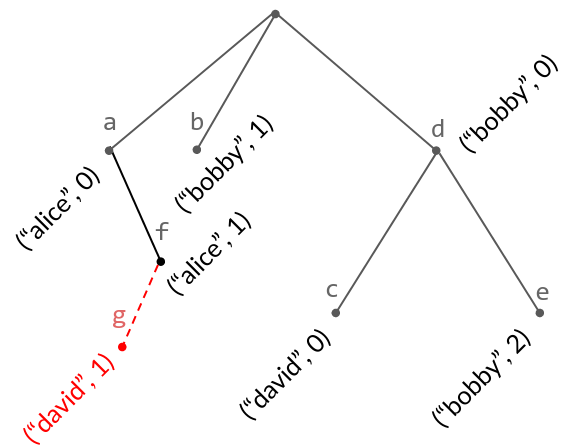 We can implement our tree-based description literally. That is, we can program a UniquelyDenseTotalOrder using an explicit tree data stucture, instead of using the string implementation’s implicit tree.

The last section’s description is not quite an actual algorithm: it describes Plain Tree in terms of a single, global view of the tree, but in reality, each user has their own local copy of the tree. These local copies may be out of sync: there can be an arbitrary delay between when one user calls createBetween and when other users hear about the created position.

The real algorithm is:

The implicit global tree we described in Semantics corresponds to the union of all users’ local trees. Describing things in terms of this global tree makes sense because (1) local trees and the global tree both only grow over time—they don’t remove or modify existing nodes—and (2) a user only receives calls to compare or createBetween on nodes that it has in its local tree, and it returns the same answer as the global tree.

Here we assume message delivery in causal order, to ensure that when a user receives a node broadcast by createBetween, it has already received the parent node.

Code for this algorithm is here.

We can summarize the resulting List CRDT with a single slide: 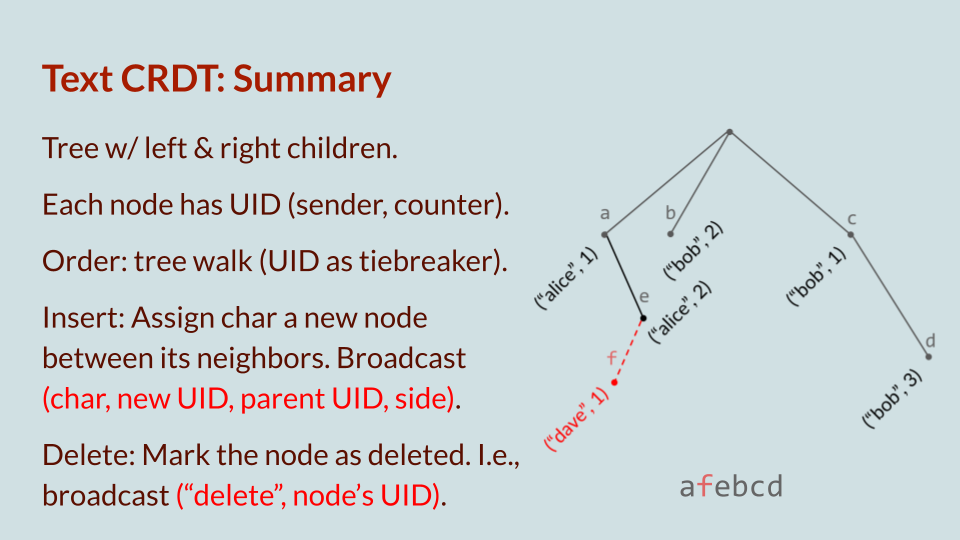 Relative to our first string implementation, this tree implementation has much better network efficiency: its positions - which the corresponding List CRDT will broadcast to other clients over the network - have small constant size (~15 bytes), and likewise for the messages broadcast by createBetween (~30 bytes with optimized encoding). This contrasts with the string positions, which can become arbitrarily long.

In practice, you’ll want to use a more optimized implementation than either of the two described here. I hope to discuss these later, but for now, note that Collabs’s list data structures (e.g. CText) all use an optimized version of the tree implementation.

Aside. I think of both implementations as variations on “the same” Plain Tree List CRDT. However, the CRDT literature sometimes assigns different names to List CRDTs that are substantially similar except for (say) different optimizations, e.g., LSEQ vs. Logoot. At the other extreme, it is sometimes to possible to find two very different algorithms with the same user-visible behavior: given a (distributed) trace of compare and createBetween (or insert and delete) operations, they assign positions with the same sort orders. The example I have in mind is Seph Gentle’s description of a YATA-style algorithm implementing RGA’s behavior (section “Improving the data structure”).

I hope the above description of the Plain Tree List CRDT made sense and was not too intimidating. If you’ve also read Designing Data Structures for Collaborative Apps, you now know what I consider the fundamentals of CRDTs-for-collaboration.

As I mentioned, Plain Tree is my preferred List CRDT. In future posts, I hope to detail why this is, and also put it in context within the List CRDT literature. So look forward to posts on:

In the meantime, feel free to ask me about these directly.

Working TypeScript code for the above snippets is on GitHub.